Something different is happening in Penang. For those of you who are interested in modern art or specifically structure, you will need to visit the Penang Municipal Town Hall in order to see the structure yourself. For the first time in Penang, there will be a ship-like structure made entirely out of bamboos.

This magnificent structure or bamboo ship is available for viewing right beside the Town Hall at Esplanade. The best part is it’s free. I hope those of you who have seen the structure before would at least have got some inspiration out of it to create something different. Read on to find out more about this masterpiece. 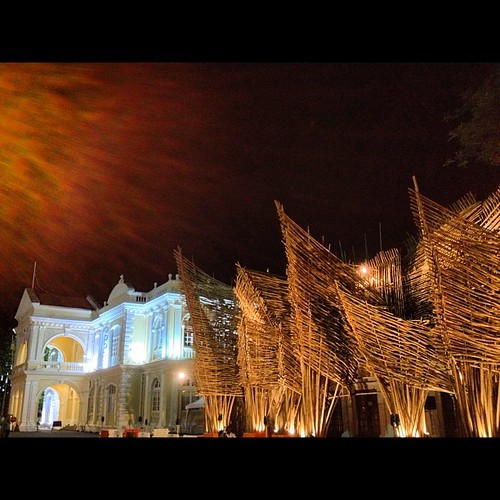 The Theatre of Ships, an astounding ship-like structure made of bamboos, is set to be a jaw-dropping sight at the Esplanade in George Town, Penang.

The installation, which resembles the bows of ships, is expected to be the most photographed art piece of the George Town Festival (GTF) 2013 after Lithuanian artist Ernest Zacharevic and his mural paintings for the festival last year.

Situated in front of the Esplanade field, the 15m-tall and 22m-wide installation, with its pointed tips, is flanked by the century-old Town Hall and City Hall.

The installation covers the façade and rooftop of the Penang Municipal Council’s one-stop payment centre which is located between the buildings.

The creator of the masterpiece, Indonesian sculptor Joko Dwi Avianto said the 3,000 pieces of bamboos used in building the structure were shipped from West Java.

“We work only at night from 7pm to 3am due to the scorching heat during the day. We first started by making eight concrete bases or footings. The square footings each contain about 40 holes where the bamboo poles were inserted.

“Then we put up the bamboos, about 5m in height each,” he said.

An interesting aspect was that not a single nail was used to join the bamboos. 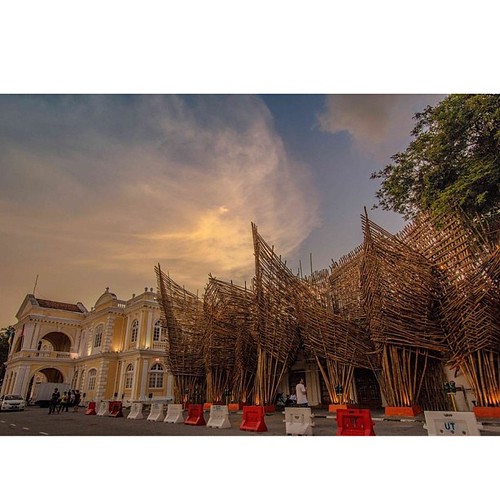 Another snapshop of Theatre of Ships that I found in Flickr.

Joko, 37, said they only used wires to tie the bamboo poles or interlaced them by using the weaving technique.

He started to use bamboo as a medium in his work since 2003 as the number of traditional crafts- men using it had dwindled after an increasing number of bamboo forests in Indonesia were cleared for development.

He named the piece Theatre of Ships for several reasons such as to celebrate the role that theatres played in the performing arts history in Penang.

“Penang is a melting pot. Since it was founded, people from all over the world came in by ships.

“For me, the ship is a symbol of community and interaction between the people of Penang,” he said, adding that the installation location is also strategic as it is located near the sea.

He said that when he looked at the structure, he imagined Pe-nangites dancing in the theatre and the ships moving to the rhythm of the waves.

The masterpiece which seems to be inspired by the Sydney Opera House, is part of the Secret Gardens of Earthly Delights component of the festival which also feature a landscaping art work called Fireflies at River Lalang at the open space next to the Town Hall.

GTF director Joe Sidek said Joko’s work, which was his first in Malaysia, is a large scale installation which had never been done in Penang.

“We want the local people to be inspired by this piece, to dare to dream big.

“Art should be accessible to everyone,” he said, adding that the structure would be up for at least six months.

Hurry up folks! The ships will only be up for about six months starting from September 2013.

Article is referenced from http://thestar.com.my/

Previous post: A Unique Way of Touring the Administrative Capital