The Temple With Glorious Past

What others said about the Penang Snake Temple

“A place to visit if you want to see snakes”

The snake temple is located at Bayan Lepas and is quite near to the airport. It did undergo some renovations and now is reopened back to the public. When you enter the temple, going further in, one will be able to see snakes ‘lying’ or rather curled on the branches of a tree in the middle of the small courtyard in between the 2 rooms. Children are delighted and amazed at the many snakes ‘staying’ at the tree. Proceeding in, one will find a few guys with pythons available for photo shoots at a certain fee. Overall a good experience to let children see the snakes up close.
Visited November 2012

“I WAS EXPECTING A TEMPLE CRAWLING WITH SNAKES – ARE YOU KIDDING ME?”

The story – The temple and its history sound interesting. The story is a good one. Please check out the story about the origin of the snakes.

The temple today – It is small and has a few snakes on a table, at the front of the temple. That is it.
My wife had her picture taken – for $10 USD – with a python wrapped around her waist and a viper positioned on her head. That was the high point of our visit. A great photo, for sure, but not much to see in the temple.

The temple was pretty with intricate details and all those stuff but what I loved the most was the garden just behind the temple where there are snakes roaming around the place. There are no warning signs or anything so just look around the trees and you’ll notice a couple of snakes!
Visited June 2013

The most interesting temple of the lot and the snake farm next door is also interesting if you can turn a blind eye to the caged monkeys.

The owner is happy to talk you through all the snakes.

In the temple you can have your picture taken with a couple of pythons draped around your neck. Downside is its a bit far out. 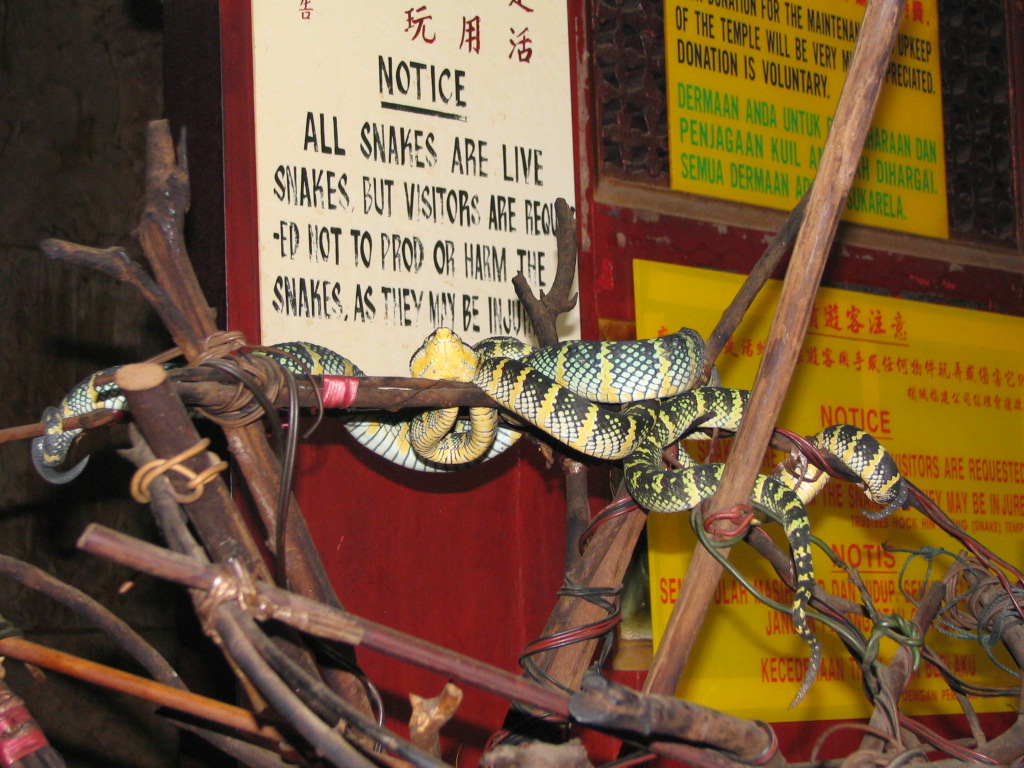 What’s special about the temple

The Snake Temple is situated in Sungai Kluang, Bayan Lepas, Penang, Malaysia and is perhaps the only temple of its kind in the world. The temple is filled with the smoke of burning incense and a variety of pit vipers. The vipers are believed to be rendered harmless by the sacred smoke, but as a safety precaution, the snakes have also been de-venomed but still have their fangs intact, visitors are warned against picking up the reptiles and placing them on their bodies for taking pictures. Local devotees believe that the temple’s snake population has come there of its own accord.

My experience of visiting the snake temple

As far as I remember, the last time I visited the snake temple in Penang was when I was on a primary school trip to Penang island. I guess I have not been to this place for more than 10 years. Although I am now living in Penang, I still haven’t taken any initiative to visit this once popular temple for over 2 years. The reason was simple; the snake temple is no longer an attractive place. It was once a signature icon of Penang island back then. I still remember anyone went on a trip to Penang would absolutely stop by the snake temple. But things changed now. The place is not having its charm anymore because there aren’t any snakes at this temple.

Nevertheless, a few days before Chinese New Year, I decided to take a chance to visit the snake temple to see what this place has to offer. I am hoping that I can at least see one or two snakes.

Anyway, here is a little bit of history of the temple. The temple has got quite an amazing history. It was built around the 1850s. In other words, its age is over 100 years old. According to local folklore, the temple became inhabited by snakes that crawled out of the jungle during the night when the construction of the temple was completed. It became a sanctuary for numerous vipers which the devotees refer to as guards of the temple. I could still remember vividly during my primary school trip, i was seeing a lot of snakes coiled around candlesticks and pillars or hanging loose from beams and bells.

As soon as I arrived at the snake temple, the first thing i noticed was the snake temple had been given a new coat of paint. It was really eye catching. Besides, there was also some renovation work going on. I guess it ain’t too bad after all. At least there is something being done to restore its charm. 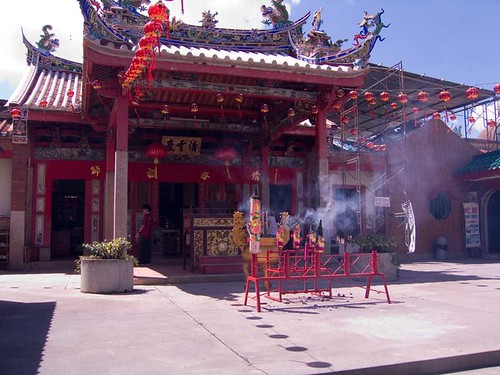 The front view of the Penang snake temple. It has been
given a new coat of paint and some renovation works are being carried out as well.

My verdict after visiting the snake temple

I stepped inside the snake temple and walked around. Much to my disappointment, there is really no snake except the one which you need to pay RM30 to take a picture with. From the appearance, I believe it’s a python and there is also a green snake if I am not mistaken. Don’t get scared as these snakes had been tamed and they are put inside a cage. Unfortunately, I guess these are the only snakes at the entire snake temple. Apart from these snakes, there is really nothing much to explore.

Another thing you could do is if you practiced taoism, you may light up some joss stick and pray to the “Ching Sui” deity at the entrance as well as the “Kuan Yin” deity at the back of the temple.

Apart from this, you could also check out on the history of the temple. There are some interesting well-written articles for you to explore and I am sure you probably find it interesting as the temple has well over 100 yrs of history. 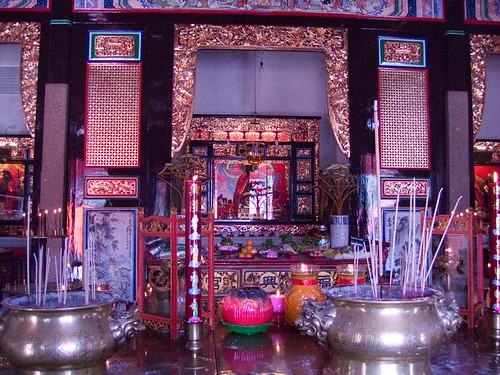 The “Ching Sui” deity is located right at the entrance
of the snake temple.

My verdict is if your purpose of going to visit the snake temple is not purely on seeing snake, then you probably won’t be disappointed much.

Next post: A Historic Place That Tells The Past About Penang