A Historic Place That Tells The Past About Penang

The Esplanade is a seafront promenade bordering an open field where festival and events are often held. The Esplanade is not just a popular tourist attraction in Penang but also a historic place that tells you everything about Penang, including the history of how Penang transformed from a swampy frontier, to a bustling trading post, to the present day modern city.

Why You Must Visit Penang Esplanade

The Esplanade is located within the core zone of the George Town Unesco World Heritage Site. Because of its inscription into the Unesco’s prestigious World Heritage listing, the Esplanade is well preserved and maintained for its historical and cultural values. Within the Esplanade, there are a few historic buildings within walking distance that are worth visiting. These valuable architectures represent the various ethnicity that had settled in the city for the past two hundred years. They are a testament to the vitality of peace and multi-culturalism that are waiting for you to discover.

Nearby Attractions Within Walking Distance

Nearby Hotels within Walking Distance

My Experience of Visiting the Esplanade

Esplanade is a very famous place in Penang island. Sadly, although I have been in Penang Island for nearly 2 years, I haven’t really paid a thorough visit to Esplanade. I mean I have been to this place but it’s just that my visits had always been in a hurry and because of that, I didn’t manage to explore the place in depth. Anyway, during a peaceful weekend, the urge to go to this place suddenly came and without a second thought, I drove over there and decided to take some time off my precious weekend to treat myself to a very nice tour at Esplanade. 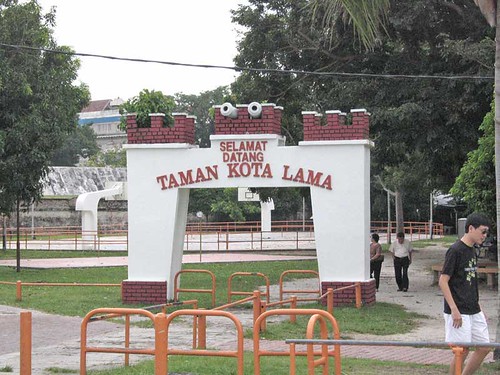 Taman Kota Lama (a public recreation park) at the
Esplanade.

The Esplanade during Chap Goh Meh

The Esplanade is actually the stretch of waterfront at the Padang Kota Lama (a field) at Lebuh Light. The place was very popular in the early days and it was actually a rather romantic place back then. On the fifteenth night of every Chinese New year back then, called Chap Goh Meh, when the moon was full, the Straits Chinese would gather at the Esplanade. The highlight of the occasion was a procession of Nyonya maidens who were mostly cloistered in their home at other times. Therefore, this was the only opportunity for young men to view the girls, and then to make inquiries that might lead to marriages.

The girls would alight from their carriages or cars to throw oranges into the sea, wishing for a good match. Fortunately, this traditional practice is no longer being followed now due to the fact that girls nowadays are no longer confined in their homes. Men don’t really have to wait till this day to find their lovers. But it was fun just to imagine the way the Straights Chinese court girls back in the old days. I can’t imagine if I would have to do this now.

The Esplanade as Tourist Attraction

Today the Esplanade is pretty much modernized with the stretch of waterfront renovated with paved walkway and lots of benches for visitors to enjoy the cooling sea breeze. There is also an open food court and frequently, functions, parades and procession are being held here because there is a big field here. In addition, there is small monument, called the War Cenotaph or War Memorial, stands majestically here as a memorial to the victims of World War I. I wonder what really determines the structure of the Cenotaph.

Other than the Penang City Hall, another historic site, Fort Cornwallis, is also situated nearby. This is another place which is worth visiting in Penang. All these tourist attractions are located within walking distance. Therefore, you don’t have to worry about transportation issue. For people who are driving, there are plenty of parking spaces at the Esplanade and you just have to pay 80 cents for one hour parking duration.

Suggested time of visit is either early in the morning or evening at around 4pm onwards as the place can get very hot from 11am onwards to 4pm which is a typical tropical weather pattern.

Next post: A Cultural Bazaar For Batik, Pottery, Paintings and Traditional Kites