A Temple That Tells Where Great Fortune Lies

What others are saying about Sin Sze Si Ya Temple

It is not the biggest, it is not the oldest, it is not the most sumptuous, but it is the most authentic. Hard to find (it stands in an unattractive part of Chinatown, surrounded by decrepit small buildings) this taoist temple was built in 1864 and remains an oasis of serenity and popular religious fervor.Take your time to really appreciate it.

Probably the oldest temple in KL! This is a Taoist temple hidden and surrounded by tall buildings in the heart of KL? It is very near to Central Market and is worth visiting for an unique cultural experience. It has historical value with its classical designs which is more than 100 years old. You can take many wonderful photos..With the joss sticks burning with smokes billowing up at the background silhoutting the statues of many chinese deities, god and goddesses..it is definitely breathtaking shots! This temple has its own history and it is believed that devotees come to this temple to pray to Sze Ya, who was known to be the guardian of KL.

Great place to sample temple atmosphere. Very tolerant of tourists but everyone was being respectful and quiet. Great for photographers and people who love old buildings. Buy some incense as a gift/souvenir.

“Tranquility in the backyard”

A nice temple in the backyard of the street. You can freely walk around and take in the sights of this traditional chinese temple. Not much foreigners around, but a few locals practicing their religion and asking what the future will bring.

The Sin Sze Si Ya Temple is dedicated to the patron deities of Sin Sze Ya and Si Sze Ya who helped Kapitan Yap Ah Loy defeat his enemies and protect Kuala Lumpur during the civil war (1870-1873). The temple was founded in 1864 by Kapitan Yap Ah Loy.

Similar to temples in China and Hongkong. Good place to learn the traditions of praying Guan Yin and Buddha. Busy during Chinese New Year and other festivals.
Source: Tripadvisor 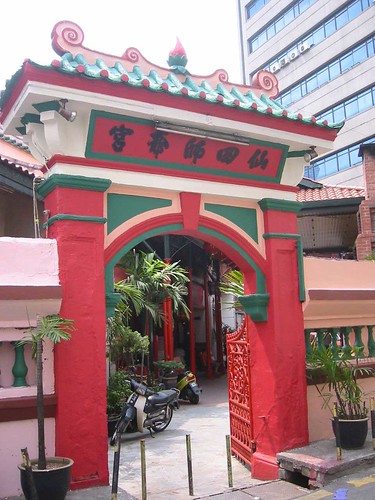 If fortune telling is your cup of tea, the Sze Ya Temple is your best bet! The Sze Ya Temple in Chinatown has a very interesting architecture whereby it is build at an awkward angle along a narrow alley off Lebuh Pudu. It’s believed that this position is determined by the principles of good feng shui practice which will bring good will and health to its occupants.

What to See in the Temple

You can see a statue of the man just left of the main altar. Its odd position, squished between rows of shophouses, was determined by feng shui.
Source: Lonely Planet

Aside from its attractive architecture feature, the Sze Ya temple is rich in history as it is one of the oldest Taoist temple in Kuala Lumpur. The temple was founded in 1864 by Yap Ah Loy, the third Kapitan China of Kuala Lumpur. Kapaitan China literally means head of the Chinese. As a philanthropist himself and his vast fortune, Yap Ah Loy funded the construction of the temple single-handedly.

To commemorate Yap Ah Loy contribution to the construction of the temple, a statue of Loy has been installed on the left of the main altar. On the right, images of patron deities Si Sze Ya and Sin Sze Ya is beautifully crafted on the wall. Other interesting features of the temple worth taking a look are the interior is filled with elaborate carvings and the smell of burning incense permeate throughout the entire temple. The entrance is magnificently decorated with two fierce lions which are common feature in Chinese and Taoist temples. The role of the lions are believed to be the guardians of the temple. 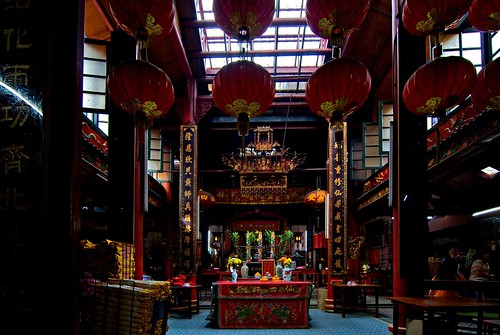 Inside Sze Ya Temple, Kuala Lumpur

Things to Do in the Temple

Fortune-telling sticks are provided for devotees; just rattle the pot until a stick falls out, then find the paper slip corresponding to the number on the stick. Staff will translate the fortune on the slip for RM1.
Source: Lonely Planet

If you believe in fortune telling, then you have come to the right place at Sze Ya temple. For an extra charge, visitors can have their fortunes told inside the temple by a Taoist. All in all, Sze Ya temple is a place worth visiting in view of its history and some interesting features of the building. Although the temple is over 100 years of age, it has been beautifully restored and renovated but its original faces are kept intact.

Getting to the Temple

The temple is located at Lebuh Pudu and is accessible through Light Rail Transits. You can stop at the Pasar Seni LRT station and from there it takes only about 10 to 15 minutes of walk to the temple. 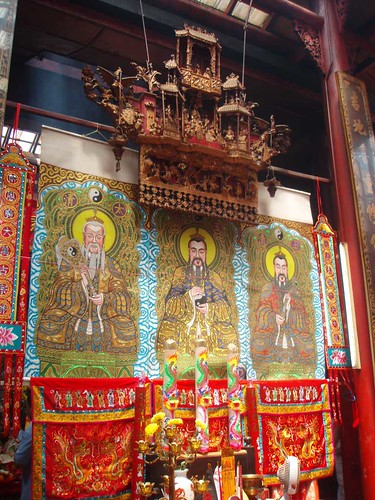 Nearby Attractions Around the Temple

Location, Map and Driving Direction to Sze Ya Temple:

Next post: An Exotic Escape to The Largest Island of Sabah