The Most Photographed Landmark In Malaysia

What others said about the Sultan Abdul Samad Building

“A must see if you come to Kuala Lumpur”

Built before 1900, I admire the kind of bricks used to build the building. It has Indian elements; quite like the old Railway station, but the railway station is fully cemented. This building is part of the Merdeka Square. Look for the super-tall flag pole in the city. This was also one of the important places vis-a-vis Malaysia’s independence day. The place is too crowded during New Year’s Eve and every night before 31 August (Independence Day).

“Great architecture, go there in the evening”

Located just at the Merdeka Square this building cannot be missed. Looks great from the outside, lot of space on the square’s lawn to admire it from different angles. Been there twice – during the day and in the evening. If you must choose – go there in the evening and you’ll be treated with a colorful feast of lighting. Pick your favourite colour – mine is blue 🙂

“My most favorite building in KL!”

Yes, it’s not Petronas that is my favorite. This building of Ministry of Information, Communication and Culture is my absolute favorite building in KL. I came here 3 times during my 4 day stay in KL.

My advice would be buying some food that’s good for picnic and coming here around 7p.m; the afternoon in KL is super long and at 7pm, There’s still daylight and you can take good photos of the building. Around 7.30 or 8pm, they will turn on the light and it looks absolutely beautiful at night. You can have a night picnic on the grass field opposite the building so you can also enjoy the beautiful view of the building at night.

It’s so easy to get here on monorail: just drop off at the Masjid Jamek station and walk 3 minutes.

Situated close to Merdeka Square, now occupied by one of the government departments, It really is an amazing building and was apparently the first example of Moghul architecture in Malaysia. Beautiful clocktower and in great contrast to the new high rise buildings nearby.

This building look grand during the day and superbly light-up during the night. If you are into postcard-worthy-night-time-photography pictures, you may want to put this place in your list. 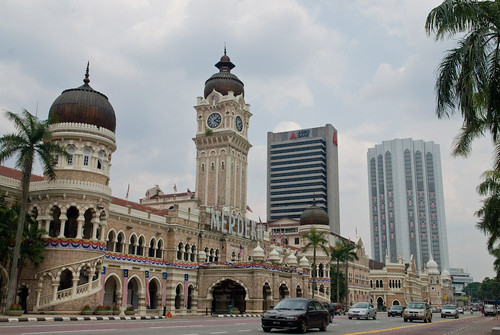 The Sultan Abdul Samad Building is located on the eastern side of Merdeka Square. The Moorish-style building serves as the headquarter of colonial administration when it was built in 1897. In addition, the building was named after the Sultan in honor of his Majestic as the ruler of the state at the time.

What to See Out of the Building

The building is the masterpiece of a British architect by the name A.G Norman who also designed the nearby St. Mary Cathedral. The building consists of mainly red brick and white stone and its unique architecture draws upon Mughal, Egyptian, and traditional Islamic influence.

The attractive features of the mosque include elegantly arched windows, cupolas, an imposing porch and a soaring 133-ft clock tower. Other than these, the building is also complemented by two smaller towers crowned with gleaming copper domes.

Topped by a shiny copper dome and a 40m high clock tower, it is a major landmark in the city. It serves as the backdrop for important events such as the National Day Parade on August 31 and the ushering in of the New Year. This heritage building used to be occupied by the then Apex Court of Malaysia, the Supreme Court which was subsequently renamed the Federal Court. The Court of Appeal was also housed in this historic building. The Federal Court and the Court of Appeals have since moved to the Palace of Justice located in Putrajaya, the new Federal administrative capital.

Behind the building flows the Klang River and Gombak River’s confluence where Kuala Lumpur got its name (Kuala means estuary and Lumpur means muddy) and in the middle of where the two rivers meet stands The Masjid Jamek (or Jamek Mosque), a mosque of similar design by the same architect.
Source: Wikipedia 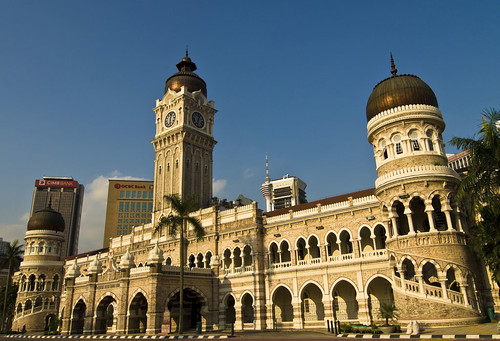 Best Time to Visit The Place

During National Day and New Year Eve celebration, the building becomes the central of attraction where parades and possession will take place in front of the building.

Every year, in the morning of Merdeka Day (31 August) as well as Malaysia Day (16 September), thousands of spectators converge on the city to watch the colourful parade along the streets of the city and performances held at the Merdeka Square. Each of the 13 states plus the Federal Territories are represented, as are the many ethnic groups that comprise multiracial Malaysia. The National Flag will be flown throughout the country, at office buildings, private homes and on vehicles. At the same time, patriotic activities to mark the holiday are held nationwide.
Source: Wikipedia

Today the building houses the commercial division of Malaysia’s High Court and it’s not open to visitors. Nevertheless, its unique and beautiful architecture makes it one of the capital‘s most photographed landmarks in the country. 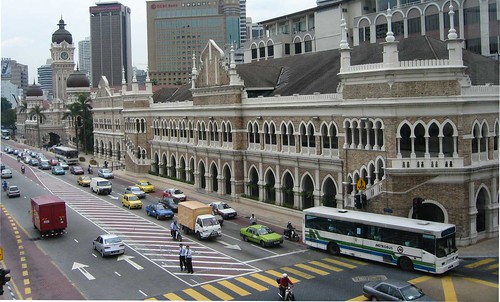 Next post: The Spotted Dog That Serves Only The Elites