A Heaven of Good Food and Fake Designer Goods

What tourists are saying about Petaling Street Market

“Shop til you drop”

Looking where to buy things from KL? This is the place to be. There’s a lot of cheap stuff for souvenir you may also use your power to bargain.

I loved the place, mainly because I love China. Lots of dining places where you can eat chinese food sitting in plastic chairs while smoking a cigarette. Lots of small vendors selling fakes, if you fancy that.

If you don’t fancy the fakes, then just embrace the smells, the heat, the crowds and one or two beers at any restaurant. If you are going to Kuala Lumpur, you have to go here. 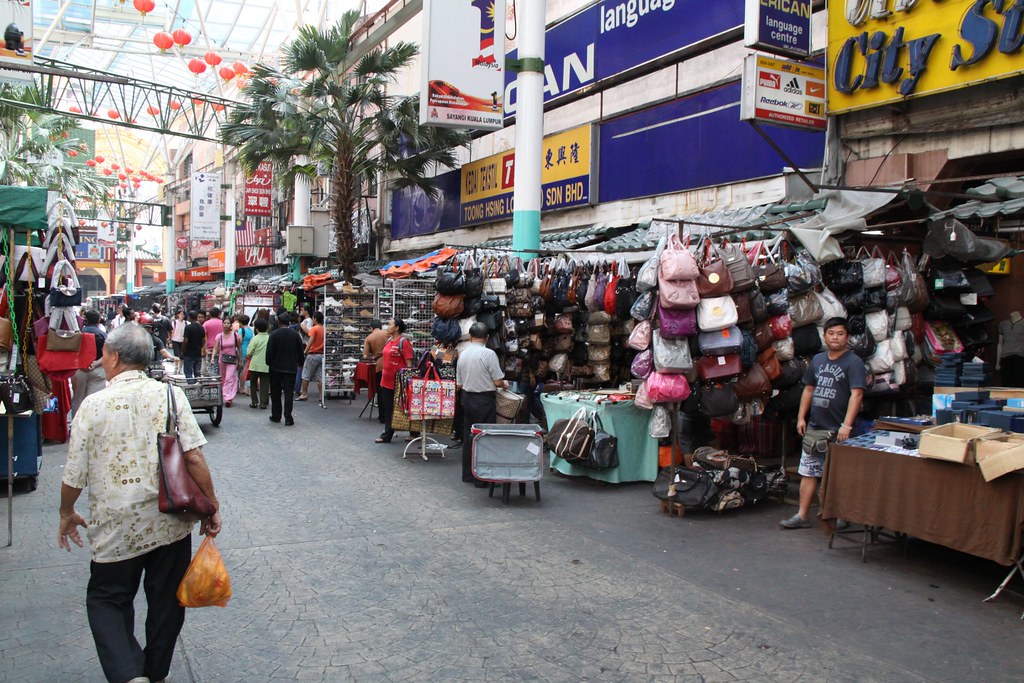 Varieties of stalls at the Petaling Street Market

“For the bargain hunters!”

We caught a train from Amang Park station to Pasar Seni station and walked down the road to Petaling Street (short walk). The market is full of copy goods made in pretty good quality. This is definitely a place for the hagglers – you really have to know how to bargain or you’ll end up paying twice as much. There’s lots of shirts, shorts, dresses, bags, watches, purses, phone accessories + more.

As smrsarma said, you can pretty much half their initial price. There are also shops inside with price tags which are still quite cheap! Got two dresses for $20AUD and a mens “ralph lauren” shirt for only $12AUD.

It gets really busy at night and can get very overwhelming from shop assistants trying to drag you into their shop but they’re all very friendly. There’s lots of food along the outside of the market and little snacks in between like bagged fruit on skewers.

Outside there is a taxi rank so there’s no need to worry about getting back. But beware, during peak hours, they may not be willing to use the taxi meter due to “traffic” (but its pretty much like that everywhere).

Definitely need to check it out! You can get lots of little prezzies for your loved ones back home for half the price so you can buy twice as much 😉 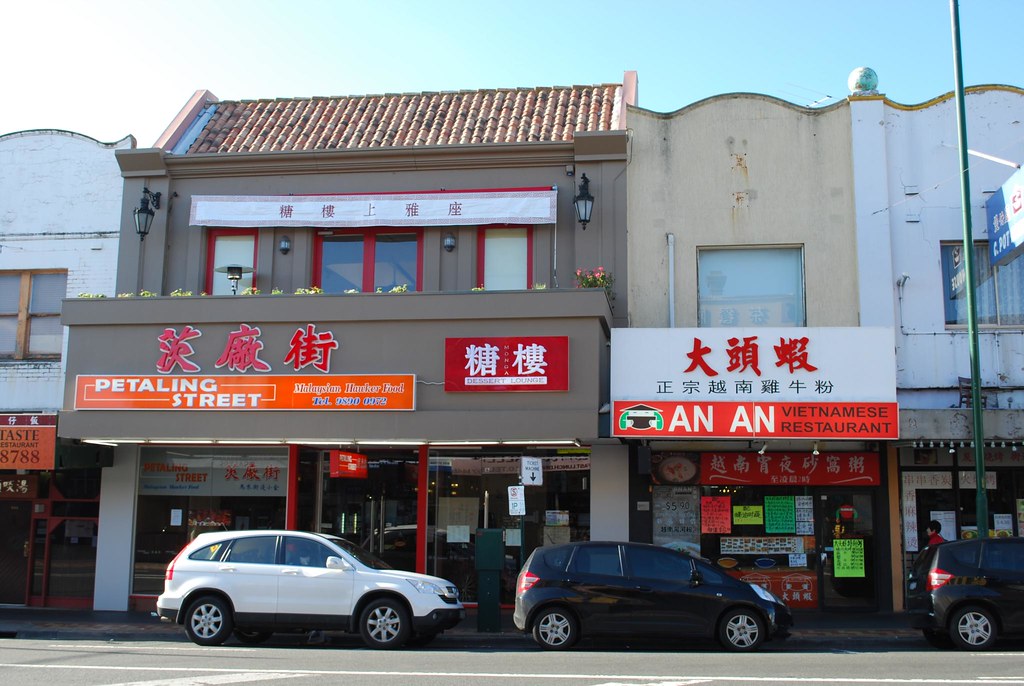 Some sophisticated shop lots at the Petaling Street Market

First time I came to KL four years ago, I stayed in a hotel on Petaling Street. We arrived after a 14 hour flight at a bright a early hour, so went straight to sleep for some much needed rest, when we came out in the afternoon, we were met by a roaring market, full of sounds and people and smells, fake goods, great attitudes, PhDs in bartering, all types of food, Chinese lanterns illuminating the street; it was like a film set.

So coming back after some time was like seeing an old friend. And I wasn’t disappointed. I hit the stalls, bartered (but came out worse), eat some fried stuff on sticks, drunk freshly made soya, kicked back a beer, got harassed for a massage, avoided the rubbish, got splashed by something suspect, met some new fellow travellers. Looking forward to coming back one day. 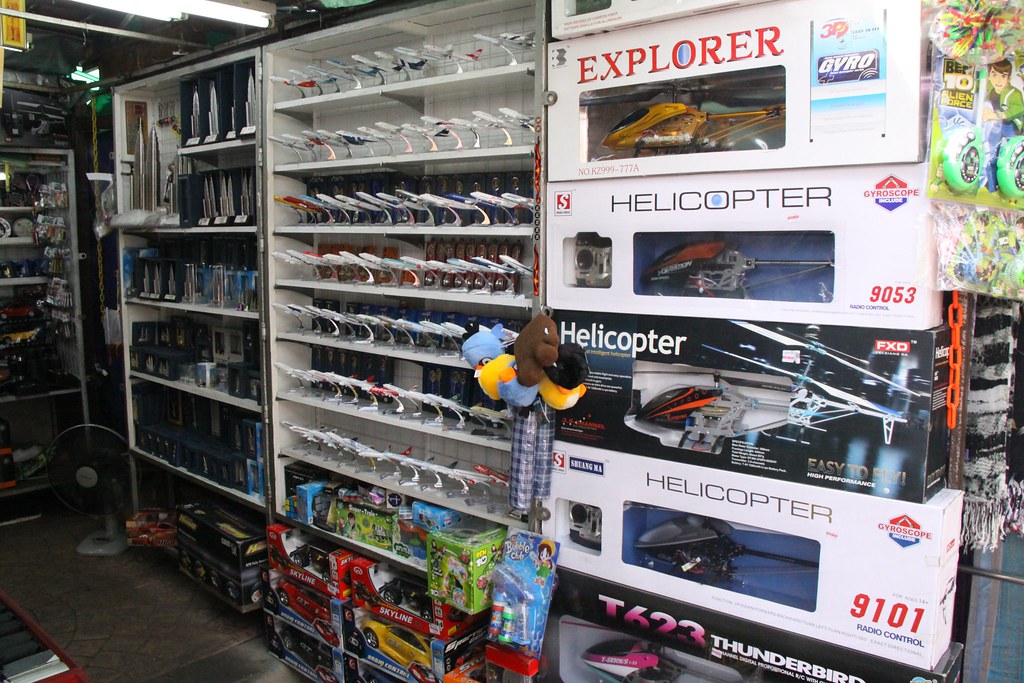 Lots of stuffs you can find here!

We lived in China for many years, where breakfast is a very serious business, so I was pleased to find during a morning wander a decent sized hawkers market within the Petaling Chinatown complex. Morning was a good time, although its open all day, with fewer people and no annoying salesmen…..yet.

All the patrons were locals, and there was a wide choice of cheap roadside style snacks from various parts of China, as well as Malaysian specialties. We had steamed buns [baozi], rice porridge [xifan] and fried rice noodles [chao fen], for a few dollars. Everyone speaks Mandarin and at least some English. The thing I like about Malaysian Chinese is they don’t treat us Westerners as if we’ve just landed from Mars. They brought the food, no rip-offs, and let us get on with it! Good stuff, but not for the timid or the fussy. 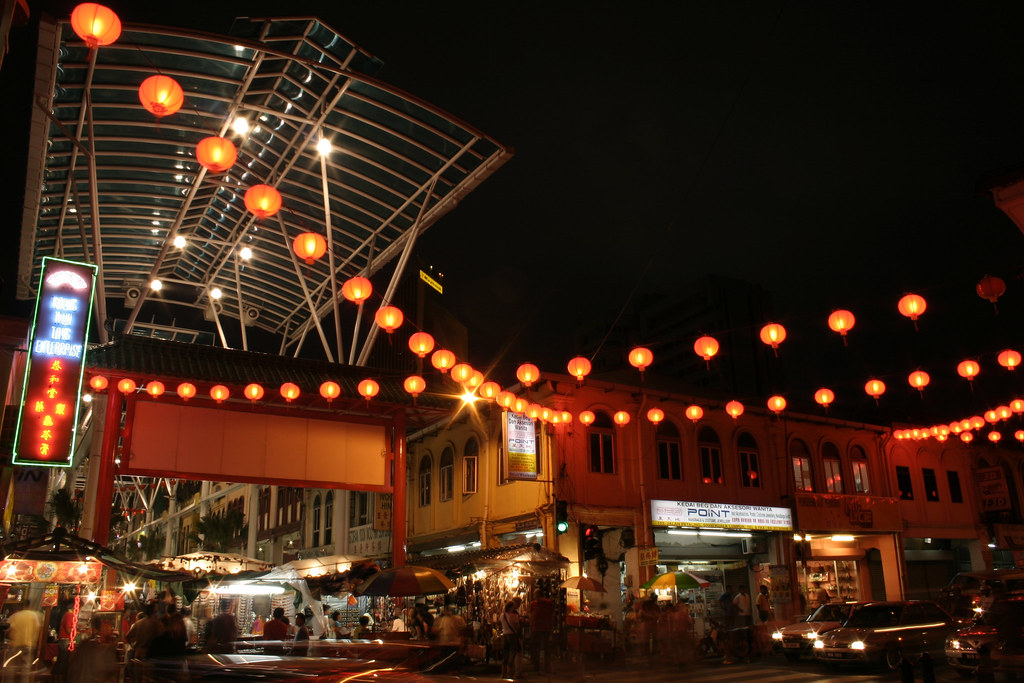 Most of the items sold in Petaling Street are fake designer goods. These fake designer goods look exactly like the real one. Even if you were scrutinizing these items with your naked eye in a detail manner, I bet you can’t tell if there were real or fake. Some of the famous fake items you can find here are watches, clothes, wallets, handbags and so on. It used to be that there are pirated CDs and DVDs sold openly here. But the crackdown by the authority has rendered many of these stores selling them secretly. 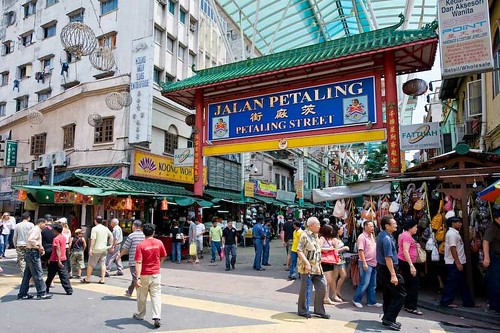 Price can get really cheap at Petaling Street!

When you are at the Petaling Street market place, bargain is the order of the day. There are a few fixed price items, and the initial offers by vendors are often at unreasonably high. Buyers are expected to haggle with the vendors and if you were buying in bulk, you have more bargaining power. Aside from clothing and accessories, there are a few shops that sell an assortment of other goods such as a variety of dried meat and traditional medicines. At the northern end is a vegetable and fruit market and plenty of cheap cafes. 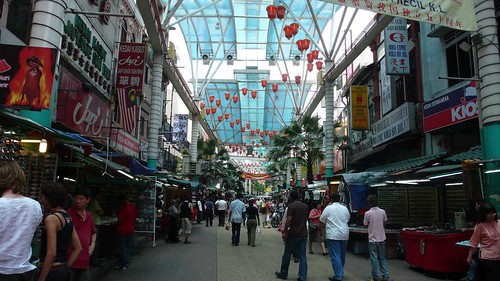 During the day, Petaling Street is just a normal shop-lined street in Chinatown until around 4 or 5pm everyday, when the area is closed off to traffic and transformed into a Pasar Malam or night market. Many of the daytime stalls pack up and are replaced by food stalls that sell a tempting array of Indian, Malay, and Chinese delicacies. Local souvenirs are also available. Both day and night markets attract large crowd and vsitors must be careful of their belongings.

Getting to Petaling Street 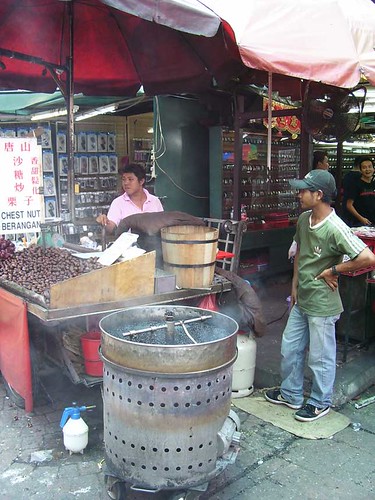 Nearby Attractions Around Petaling Street

Next post: A Colonial Era Railway Station That Still Shines!