A Living Heritage That Tells All About Malaysia

The National Museum or Muzium Negara is Malaysia biggest and grandest museum and is located at Jalan Damasara, Kuala Lumpur. The history of the museum is dated as far back as World War II. During that period, the old Selangor Museum building was destroyed by Allied bombing. It was then reconstructed and opened again in 1963 and by then it has been made the National Museum of Malaysia.

The architecture of the National Museum resembles that of a traditional Malay palace and its façade is adorned with murals depicting scenes from the nation’s history. Inside, four themed galleries provide an introduction to Malaysia’s ethnography and natural history. The Cultural Gallery and Faces of Malaysia Gallery both exhibit colorful traditional costumes as well as handicrafts such as kites and shadow-puppets. Dioramas illustrating some unique rituals of the Malay, Chinese and Indian communities are also on display.

Other than cultural exhibitions, the Natural History Gallery is also filled with examples of native animals, insects and flora. The fourth gallery has an impressive collection of antique weapons, musical instruments and Southeast Asian ceramics. 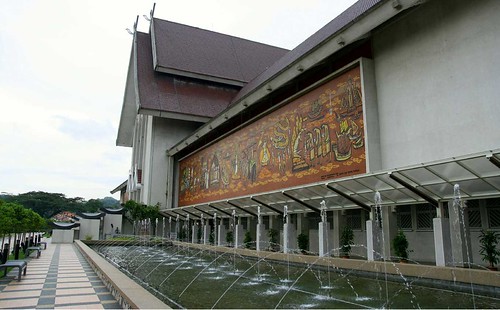 Location, Map and Driving Direction to the National Museum:

Previous post: The Magnificent Mosque That Will Make Your Jaws Drop!