Comments by tourists about Batu Caves

Statue coloured in Golden looks amaing and is quite notable from long distance. Caves are really cool although you have to walk a bit

“Civilization and nature brought together in a Hindu monument”

This place has all it takes to make it an exciting trip – you need to climb hundreds of stairs to enter an ancient cave while being overtaking by little monkeys so you could see an active Hindu shrine. Fascinating! 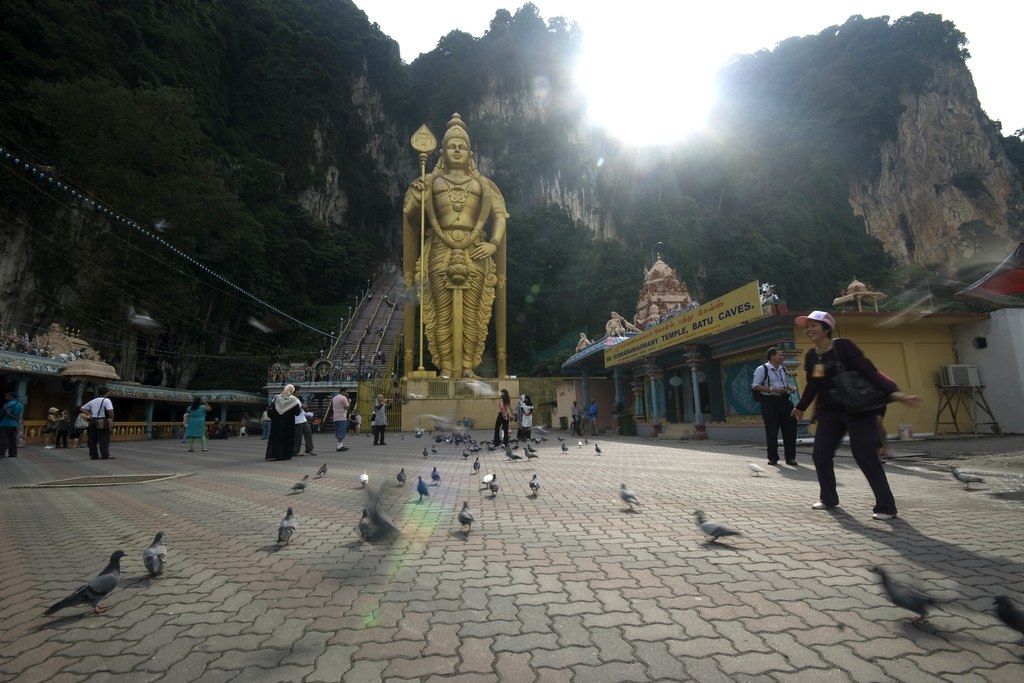 A sacred place of worship and adventures - Batu Caves

Well worth visiting, and definitely take the option of visiting the “Dark Cave” tour as well as the temple cave. This was really interesting and good experience.

I rated this visit excellent because we had the opportunity to really emerge in another culture and religious beliefs. We came accross people that were bringing their children to the temple to thank the gods for their help in having children.

Their heds were colored in yellow and also their cloths were yellow. I found it joyful, a colour of radiating joy, of shared joy.The songs, the food ( which we also manage to taste as being offered ) the smell of flowers, the lights and colorfull statues, all were interesting, captivating and exotic, still very human. A rewarding visit, from all points of view. 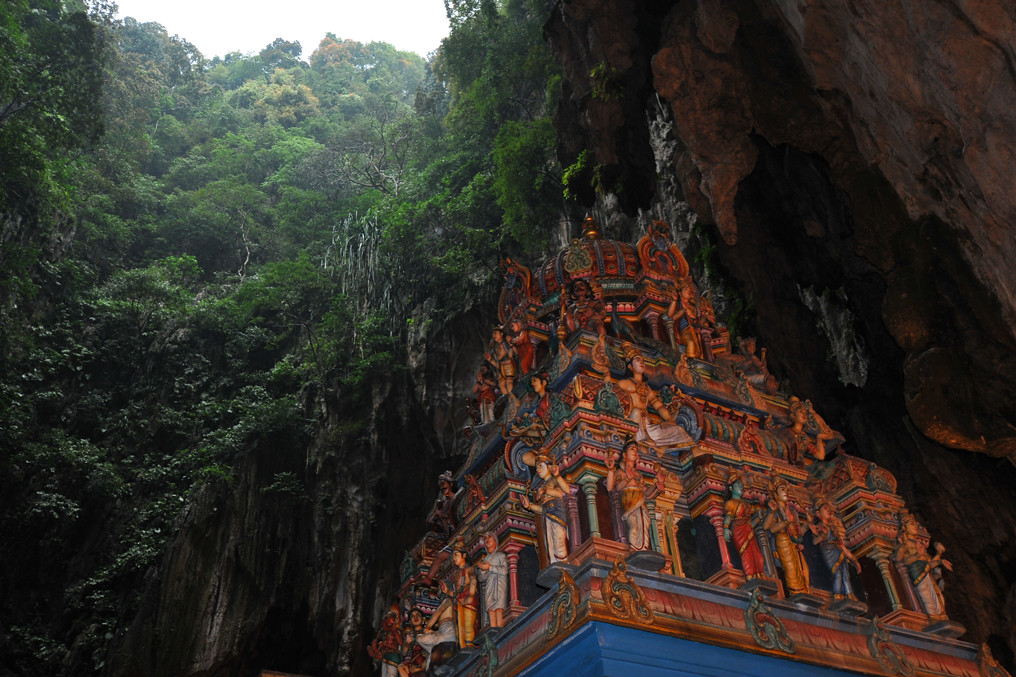 More than a Hindu temple, the cave amazed us. The cave opens to the sky at 200 metres and the hole is so green and lush. Beautiful sight. The Hindu temple actually pollutes this natural wonder (I am a Hindu and I strongly support restricting the activities of temple there to preserve the natural wonder).

“One & only the great batu caves”

One of the beautiful temple in Malaysia, been going there since small. I would highly recommend others not to go during thaipusam festival as u will surely wont be able to enjoy admiring the beauty of the temple & do watch out for the monkeys, do not carry anything on your hand especially in a plastic bag. to prevent stealing by the monkeys 🙂

Overall a must visit place when your in Malaysia.

Devotees and tourists are tirelessly working their way up the steps.

Batu Caves is a well known tourist destination in Kuala Lumpur due to not only its unique 400 million years old limestone hill but also the cave as a Hindu shrine for the Hindu festival of Thaipusam in Malaysia.

Located in Gombak district, about 13 kilometters (8.1miles) north of Kuala Lumpur, Batu Caves is a vast cavern complex that consists of rugged limestone cliffs and a series of caves as well as cave temples. Batu Caves takes its name from the Sungai Batu or Batu River, which flows past the hill. Batu Caves is also the name of a nearby village.

Long before Batu Caves became a popular tourist attraction, the caves had already been explored and used as a shelter by the indigenous Temuan people (a tribe of Orang Asli or the Malaysia Indigenous People).

Batu Caves gained worldwide popularity when American naturalist William Hornaday came upon them in 1878. Deeply impressed by the extent and beauty of the largest cave, he compared it to a grand cathedral.

How Batu Caves became a place of worship

Thereafter Batu Caves was promoted as a place of worship by K. Thamboosamy Pillai, an Indian trader. He was inspired by the ‘vel’-shaped entrance of the main cave and was inspired to dedicate a temple to Lord Muruga within the caves.

In 1891, Pillai, who also founded the Sri Mahamariamman Temple, installed the murti (consecrated statue) of Sri Subramania Swamy in what is today known as the Temple Cave.

Limestone inside the Batu Caves

It was only then Batu Caves was converted into a shrine dedicated to the Hindu deity Lord Murugan and soon became the most important pilgrimage site for Malaysia’s Hindus. During the annual Thaipusam festival, held in late January or early February, a spectacular scene unfolds here, when an estimated one million pilgrims visit the caves.

Dominating the entrance to the caves is a 141-ft (43m) tall golden statue of Lord Murugan. The statue, which cost approximately Rupees 24 million, is made of 1550 cubic metres of concrete, 250 tonnes of steel bars and 300 litres of gold paint brought in from neighboring Thailand. The 42.7m (130 feet high) high statue of Lord Muruga was unveiled in January 2006, having taken 3 years to construct. It is the tallest Lord Muruga statue in the world. 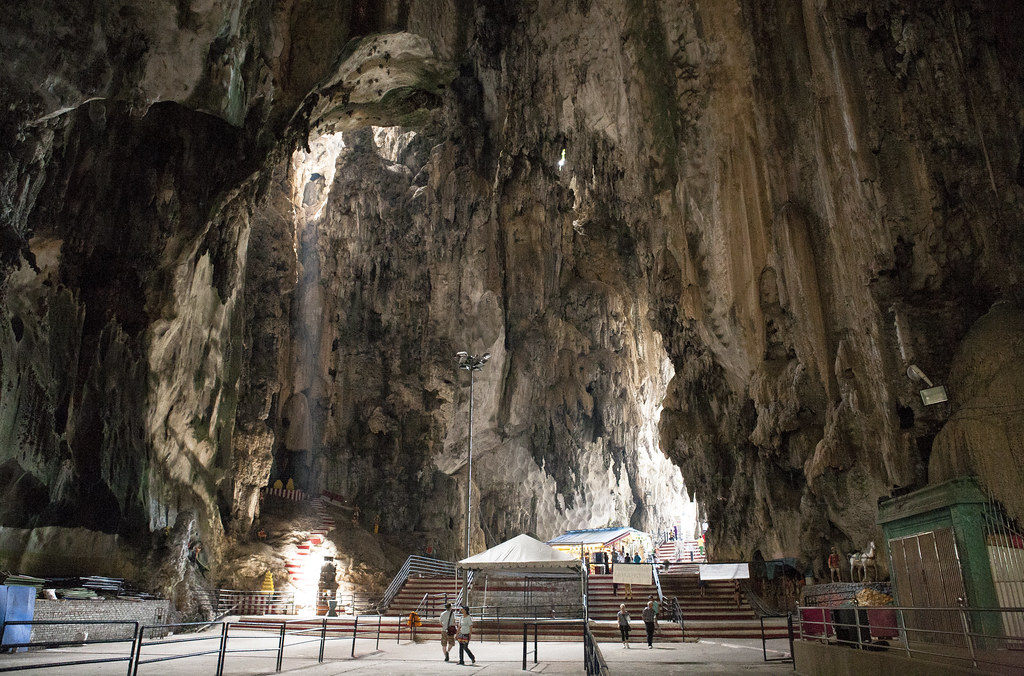 A magnificent natural wonder inside the Batu Caves.

What to see inside Batu Caves

From the entrance a steep flight of 272 steps leads up to the main cave. Also known as Temple or Cathedral Cave, it is 328ft (100m) high and is partially lit by shafts of light that stream through gaps in the roof.

The cave walls are lined with numerous statues of Lord Murugan, along with those of other Hindu gods, including Shiva, Ganesh and Durga. The dome of the cave is richly painted with scenes from the Hindu scriptures. 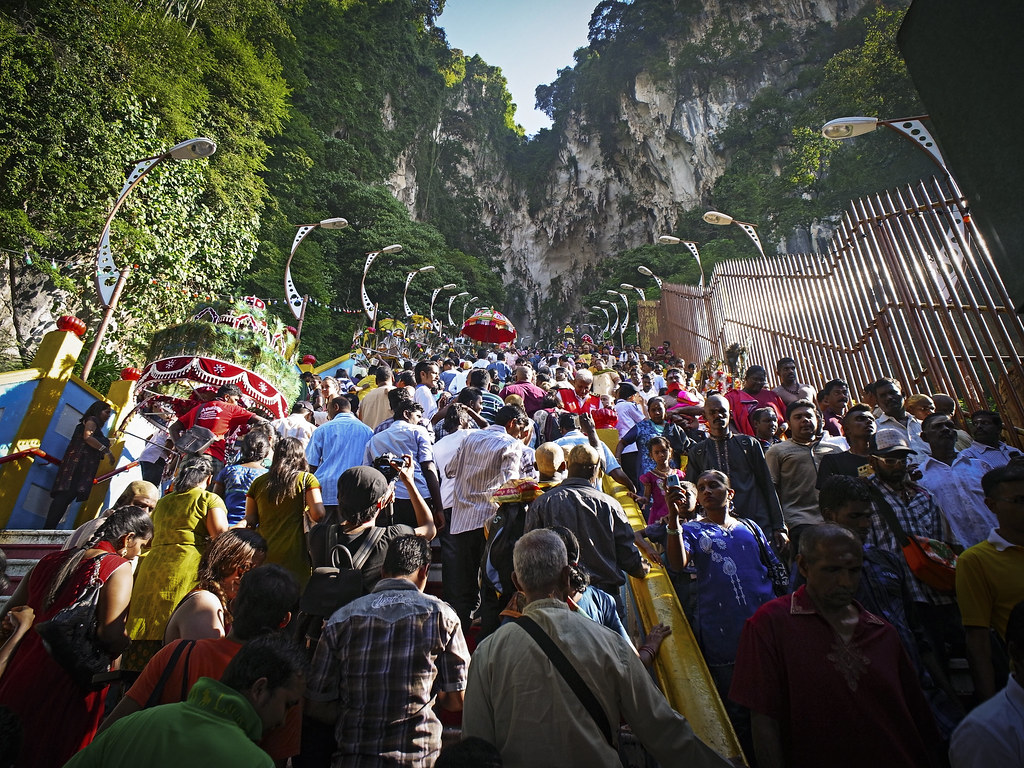 Batu Caves will be drowned by devotees during Thaipusam celebration.

In a chamber behind the central shrine is the statue of another deity, Lord Rama which is housed in the Ramayana Cave. The Ramayana Cave depicts the story of Rama in a chronicle manner quite effectively. The cave is well lit and allows the visitor to stroll leisurely viewing the depictions along the irregular walls of the cave. One might experience the feeling that one is strolling through the giant intestines of the mighty demon, Kumbhakarann, brother of King Ravana of Lanka.

In addition to being a holy site for the Hindu Thaipusam festival, Batu Caves is also the centre of rock climbing development in Malaysia for the past 10 years. Not many people realize that Batu Caves offers more than 160 climbing routes.

The routes are scattered all around the side of Batu Caves, which is made up of limestone hills rising to 150 m. These climbing routes are easily accessed as most crags start from ground level.

All in all, Batu Caves is a must-visit tourist attraction in Kuala Lumpur.