A Romantique Rendezvous at the Colmar Tropicale Berjaya Hills

What other tourists are saying about the Colmar Tropicale, Berjaya Hills

“Colmar for the Family”

Took a 4 bedroom suite and 1 studio suite for wife & me while kids stayed in the suite.

Price during this time of year was very affordable. The food was acceptable if you like western. Being in this atmosphere with French theme that you have to expect that.

Place to unwind and just hang out. Night & days shows were good. Family want to wait for the shows.
Activities are there if you want to but some were under repair.

The overall place needs to do constant touch up due to the cold weather. Temperature was around 15°c and drizzling. Since wood will have aging signs.

Went around to animal farm not many animals but enough to spend half day.

The Japanese gardens was a tiring walk but had a chance with mother nature.
Overall family enjoyed the stay.

Improvements should have more french dressed employees even though Philippines and others are there.

Need to have petrol and bank as sometimes you can run out off. Lucky all major cards are received.

Room Tip: if you are going with kids the suite would be the best choice as it has 4 beds and you can add 1 bed

With a great view and nice weather. Its soo relaxing and recommended for couples or families. There are japanese garden nearby where you can enjoy the view better and walk through the botanical garden.

However, it’s not accessible. You can book their transfer for a fee and it takes about 45mins depending on road conditions. Restaurants within the compound was worth it.

A very nice place to go for family vacation other than Genting. One can have a nice countryside view, relax while enjoy the weather too.Children also enjoy the horse n donkey ride.

Also extream activities too. On top of that, you can also enjoy the Japanese traditional life, by wearing the kimono, my children enjoyed this, something different from other places.

You have to try the Japanese cruisine here too. The hotel staff also very friendly together with very big hotel room.

“off from hectic city”

Went with family. Hotel great. Lots of attraction and activities can do. Entertainment for the guests and tourists. Classic looking hotel. Except that, the shuttle services and F&B services should be improved.

Add more shuttle on weekends and public holiday. For F&B service, server should be more than 1 during the peak seasons. Overall, it’s really nice and great place to visit. 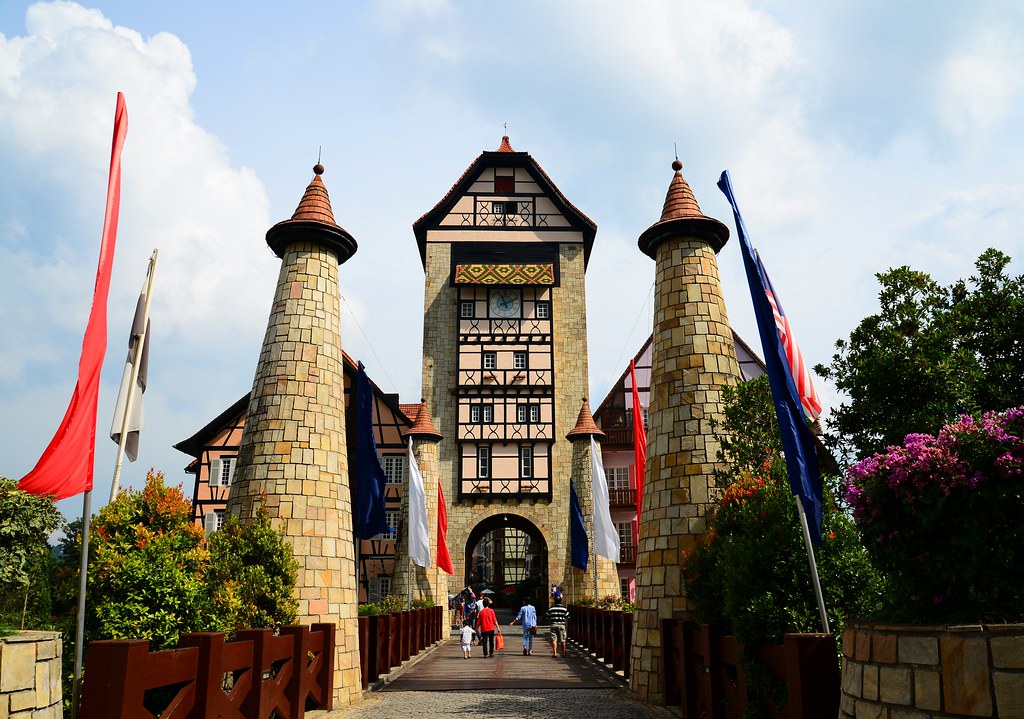 There are few visitors to Berjaya Hills on a weekday and fewer things to do, which is just fine for those who have checked in. Many are perfectly content to soak up the stillness of the little French-styled eateries that line the faux cobblestone street in Colmar Tropicale, Berjaya Hills, nibbling on fluffy croissants and sipping café au lait.

It was, incidentally, the idea of ex-Prime Minister Tun Dr Mahathir Mohamad who, after a trip to the Alsace region in France, suggested that the owner of the Berjaya Group, Tan Sri Datuk Vincent Tan, replicate the beauty of what he saw.

The result is both quirky and quaint — life-sized recreations of a 16th-century village in which you could actually live, sprung up amid the splendour of sky, forest and hills.

Although it’s a mere hour’s drive from the chaos and clutter of Kuala Lumpur, Berjaya Hills feels like an awfully long way from anywhere. The nearest ATM is located in the nearest town of Bentong, about 30km away.

Not surprisingly, lovers both young and old, flock to Berjaya Hills by the dozen. As soon as the day’s tourists drift away, these starry-eyed lovebirds emerge from their rooms to wander around the main square of Colmar, holding hands, smooching and laughing over dinner.

It isn’t every day that you can visit a spot that is so conducive for romance that it looks as if it was invented for that purpose alone.

Between the beautiful, jarring landscape of God and Man’s creations there are still remnants of Tan and his family’s daily life to be glimpsed. A part of it had, after all, belonged to them. It was their private sanctuary, and, on certain bright, cloudless days, you can still spot the tycoon getting acquainted with the divine in the Buddhist temple he built within the vicinity.

Or his mother, lovingly tending her plants to maturity before bringing them back to the city’s pervasive heat and smog. 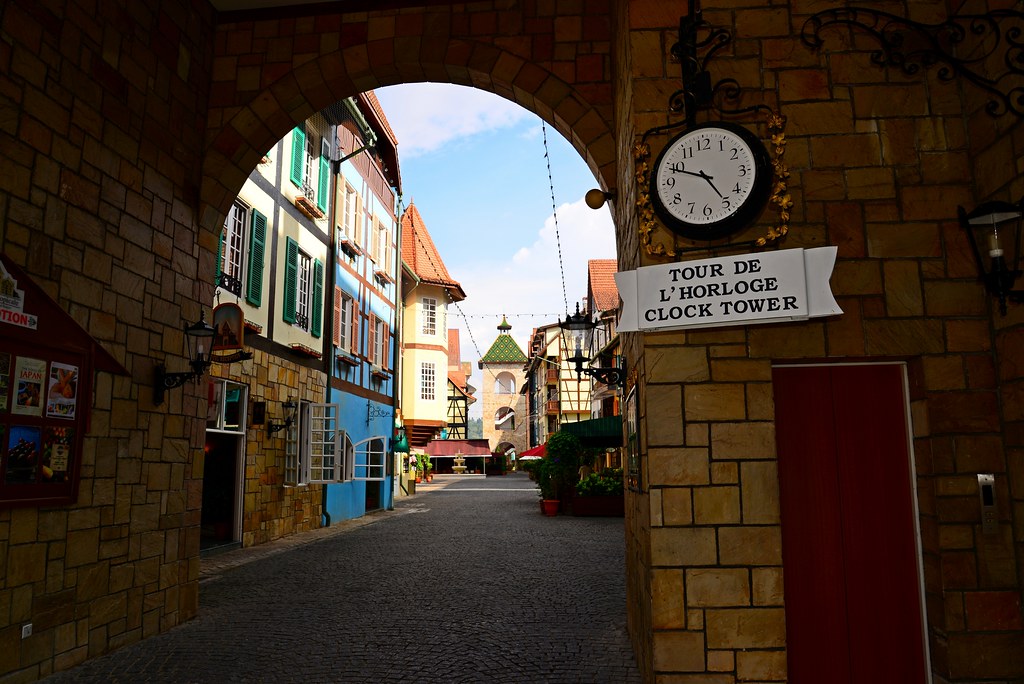 Surrounding Attractions of the Hotel

However, if there’s one thing that sets Berjaya Hills apart from all the other hillside resorts in Malaysia, it’s the Japanese Village. If you think Colmar Tropicale is quiet, try swinging by at the break of dawn, and you’ll be awed by what real tranquillity means.

Here, you can learn the art of Zen by visiting the teahouse, taking a stroll in the meandering footways of the botanical gardens, meditating to the jungle orchestra or getting a blissful massage in the highly pricey but exceptionally divine Tatami Spa, which comes with a private onsen (or outdoor bath).

The village — meticulously designed by renowned Japanese architect Kaio Ariizumi and built by a team of 22 skilled craftsmen from Japan — is an exercise in harmonious living. No trees were cut, and only minor earth cuttings were done. 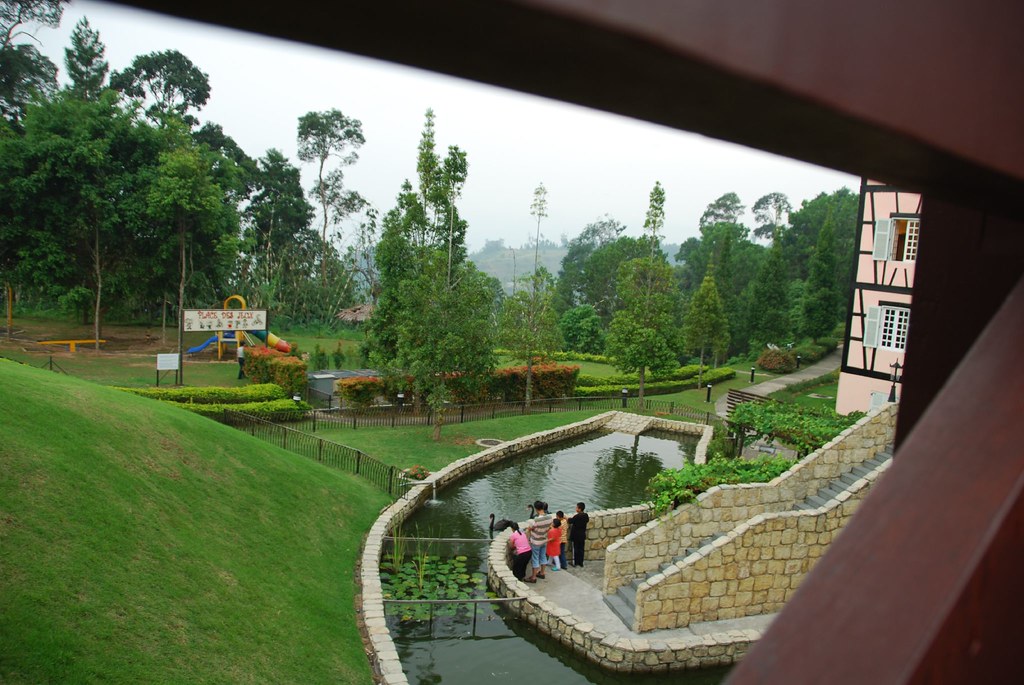 Tranquility is the order of the day.

From the imported lemon-scented shrubs to the chumon (or entrance gate), everything’s so distinctively Japanese that you almost feel like an extra on a film set. It’s very much like play-acting: visitors are expected to feed the koi for blessings, and enter the teahouse by crawling through a small opening.

“It’s meant to be a symbolic ritual for the Japanese,” explains Bjorn-Henning Buth, the general manager of Berjaya Hills.

“Whether you’re a high-flying lawyer or a lowly-paid waiter, you still have to humble yourself spiritually. No matter what level in life you’re at, we’re all the same at the teahouse.”

Those who cannot bear to bid sayonara to this enlightened way of living can rent a temporary hideaway at Ume Tatami, an opulent three-bedroom suite that captures the very essence of Japanese architecture through its tatami mats and paper screen doors. But this is an option only if you’re willing to fork out the money.

Everyone from the royal family to Dr Mahathir himself has stayed here — the latter while he was penning his autobiography. Then, there is the occasional Japanese guest who stops over to marvel at the Dancing Sakura, a pretty oil painting by notable Japanese painter Tamura that hangs proudly in the living room.

Feeding the koi in the Japanese Village for blessings.

There’s something about Berjaya Hills that makes couples fall in love, sometimes all over again. According to But, it’s not uncommon for couples to profess their love here in front of watchful eyes.

“The most romantic would have to be a 62-year-old foreigner proposing to a lady of the same age,” he says.

“He requested a single table by the pool side, all lit up with candles. He had a four-course meal prepared, and the sorbet came out covered with a silver cloche. A ring was hidden under it. She said yes, of course. But it goes to show that love does not end with age.”

Newly married couple Ooi Sue Hwei, 28 and Prasad Babu, 29, also got a taste of romance in their latest trip to Berjaya Hills. 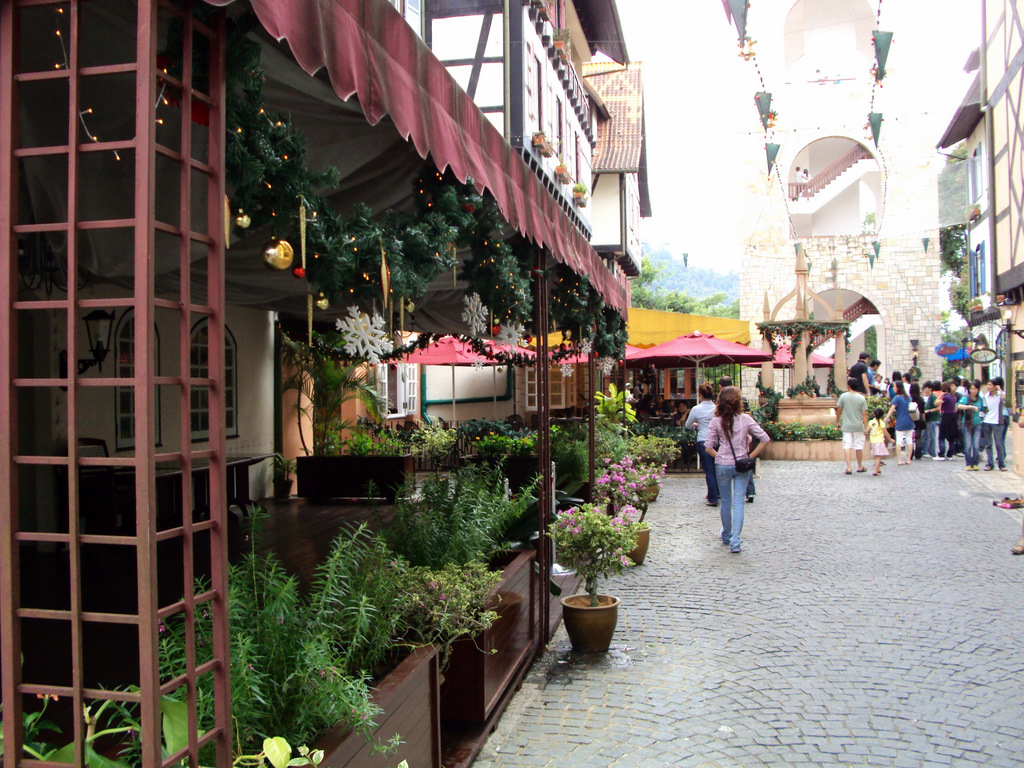 Taking a stroll in the meandering footways of the market place.

“This is our second time here,” says Ooi. “We haven’t had a chance to celebrate our honeymoon because we’re both really busy with work and re-adjusting our lifestyles. Married life isn’t as easy as everyone thinks — it takes a bit of work getting used to the habits of the person you’re suddenly shacked up with.

“So I thought why not come here? A short getaway can be as effective as a long getaway, especially in our case.”

Ooi wasn’t particularly impressed with the rooms (the suite they stayed in suffered a burst pipe) or amenities (most activities in the resort are charged and somewhat expensive), but for her, it’s the little things that made her trip really special.

“We had a lovely stroll around before breakfast and there wasn’t a single soul around. Dinnertime at La Cigogne was memorable too. The food was great, but when they serenaded us with Getaran Jiwa, the song we had danced to on our wedding night . . . that was priceless.” 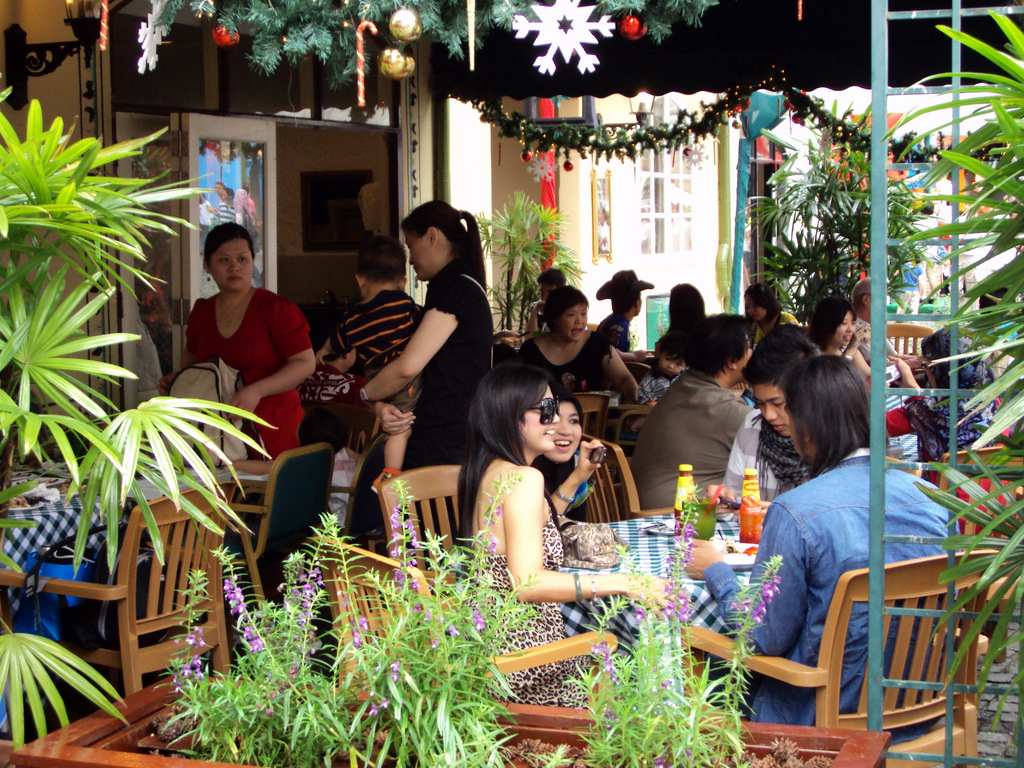 A perfect place for escaping the buzz of the cities.

If you’re thinking of going, however, do it before the bulldozers. Berjaya Hill’s idyllic atmosphere isn’t expected to last, as plans are underway to further develop and Disney-fy the area.

“Berjaya Hills is sitting on approximately 16,000 acres (6,475ha) of land,” says Buth. “We’ve only developed 11% of it so far, but we plan to make this into a community, with holiday homes and a university. We’re gunning for the maximum limit of development set by the government, which is 40%.”

For many environmental groups, this could only spell disaster. The Berjaya Group had initially planned on a casino to kick-start the project but thankfully couldn’t get its license approved.

The next big project, then, will come from the Chateau Spa and Wellness Resort, a French-themed boutique spa hotel modelled after the 18th-century medieval Haut Koesnigburg Castle in Alsace.

Guests, then, can be assured of a few more years of nature’s song and peace. The only problem for now will be deciding when to savour it.

Quoted from The Star

Location, Map and Driving Direction to the Berjaya Hills Resort in Bukit Tinggi:

Next post: The Finest Colonial Mansions That Turned Into Luxury Hotels